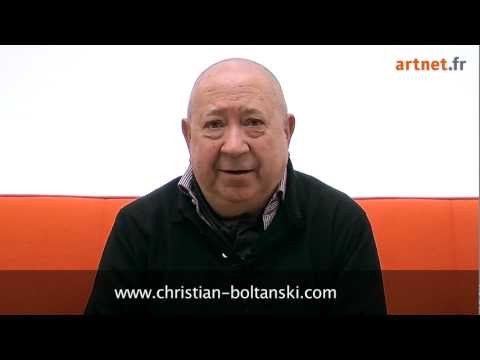 On the occasion of the twentieth anniversary of her gallery in Paris, Marian Goodman has invited Christian Boltanski to present his latest work. The exhibition Faire-part will open on Thursday, October 22 from 6:00 to 10:00 pm during the week of FIAC (Paris International Art Fair). Christian Boltanski is generally considered as France’s most famous and influential living artist. This will be Boltanski’s first solo exhibition of new works in Paris since his show at Grand Palais in 2010 and is highly anticipated.

Conceived as a complete installation, Faire-part
is a meditation on disappearance and the passage of time. Boltanski subtly weaves the different temporalities of his life and work to produce two large installations: a labyrinth of veils suspended from the ceiling and a contemplative piece composed of a video projection and a bed of hay and cut flowers. The featured works also include the diptych Départ-Arrivée (2015), composed of red and blue light bulbs, which alludes to the gallery’s anniversary: the arrival symbolizing a new departure.

La traversée de la vie (2015) reprises the photographs Boltanski used in one of his seminal works in 1971, namely Album des photos de la Famille D.
The artist, working like an ethnologist, recovered this 1950s album and mounted the images to create a wall of photographs. In its new presentation in the ground floor gallery, the images of this family have been enlarged and printed on screens, as if faded over the years. Visitors are invited to enter this wave of textile and circulate among the memories that are not their own but which will surely speak to them, individual and collective memories blending together.

The installation Animitas (Little souls) combines a video projection and a floor covered with dried grass, petals, and flowers which wither and decompose over the course of the exhibition. The video shows Boltanski’s eponymous work installed in the Atacama Desert since 2014. This work, dedicated to constellations, is installed in a unique natural setting which is characterized as having the lowest level of light pollution in the world. Made up of several hundreds of tiny Japanese bells, Animitas maps the exact configuration of the sky on September 6, 1944, Boltanski’s date of birth. Stirred by the wind, the bells tinkle like soft chimes evoking for the artist “the music of the spheres and the voices of drifting souls.”

As is often the case in Boltanski’s work, objects (photos, pieces of clothing, bells, flowers…) give voice to absent subjects and are an invitation to the viewer to meditate and contemplate. The artist who thinks of himself sometimes as a “sentimental minimalist,” has created here an unlikely spiritual landscape. Like withering flowers, these little bells that are subject to erosion, symbolize the brevity of existence.

Born in 1944 in Paris, Christian Boltanski began to develop in the late 1960s a “personal ethnology” marked, among others, by the influence of Claude Lévi-Strauss and Harald Szeemann. The pieces Reconstitutions des choses de mon enfance and the Vitrines de reference date from this period. At the same time, drawing on museology, Boltanski exhibited inventories of items of anonymous owners. Between 1978 and 1984, he produced the photographic series Compositions, followed by Monuments and Reliquaires, works in which photographic portraits of anonymous people alongside biscuit tins acquire the form of religious altars, lit by small lamps or plain light bulbs. From 1988, his visual vocabulary also began to incorporate used clothing. Since the 2000s he has been designing monumental installations in atypical locations. Among his current projects, the Archives du Coeur are undoubtedly the most ambitious. For this project the artist collects and records heartbeats from around the world, which are then stored on the small island of Teshima in Japan.

Since his first exhibition at Le Ranelagh cinema in 1968, Boltanski’s work has been shown in numerous countries. As early as 1984 the Musée national d’art moderne in Paris staged a retrospective of his work, while in 1988 several major American museums organized an important tour exhibition entitled Lessons of Darkness. In 2011, Boltanski represented France at the 54th Biennale in Venice. More recently, he completed monumental projects in a number of South American countries, including Chili, Brazil, and Argentina. In 2012, in Buenos Aires, he had three simultaneous exhibitions at the Museo de la Universidad de Tres de Febrero (Muntref), at the Immigrants’ Hotel, and at the former National Library. In November 2015, he is invited to exhibit at the Fondazione Merz in Turin, while in early 2016 the Museo d’arte contemporaneo (MARCO) in Monterrey, Mexico, will hold a retrospective of his work. Christian Boltanski has been recognized with several awards, including the Praemium Imperiale Award (2007) and the Kaiser Ring (2001).

Christian Boltanski and the gallery dedicate this exhibition to Chantal Akerman.